The role of solar decomposition models#

Solar decomposition models are some of the most frequently used algorithms, and are often used during the first part of a larger analysis. As described earlier, decomposition models permit estimating the beam or direct normal irradiance (DNI) from GHI measurements, often using relationships between the clearness index (\(k_t\)) and the diffuse fraction of solar irradiance (\(k_d\)). The clearness index is defined as:

where \(E_a\) is the extraterrestrial irradiance, and \(\theta_Z\) is the solar zenith angle.

The diffuse fraction is defined as:

The role of decomposition models can be graphically illustrated in the diagram below: 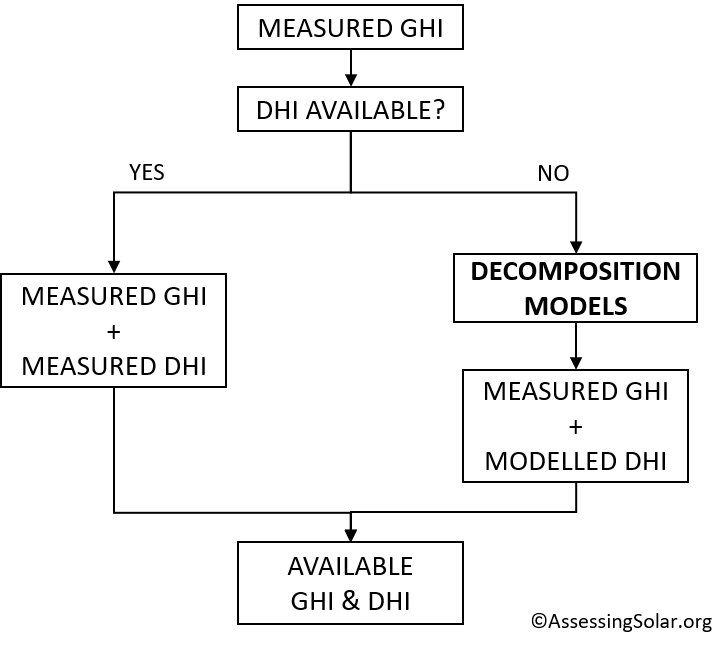 Multiple models have been proposed for the decomposition of global horizontal radiation/irradiance into its direct normal and diffuse horizontal components in the scientific literature. Below, the implementation in Python of some of these methods will be shown. The following methods will be modelled and compared:

The four decomposition models, among some others, are implemented in the open-source library pvlib python.

Before applying the models in practice, an example irradiance data set will be retrieved.

To illustrate the implementation of each of these models, we will use real irradiance observations. The decomposition models will be used to calculate DNI and DIh from measured GHI, and the results will then be compared to measurements of DNI and DHI. The first step is getting and preparing the measurement data to be used.

The irradiance data used is from the BSRN Cabauw station operated by the Royal Netherlands Meteorological Institute (KNMI). The data is retrieved from the BSRN FTP server using the get_bsrn function from pvlib-python. The Cabauw station is located at latitude 51.9711° and longitude 4.9267°, at an elevation of 0 m AMSL. The reason for choosing the Cabauw station is that the data has already been extensively quality checked, hence in this example this step is skipped. The data used are 1-minute global, direct, and diffuse irradiance measurements between January and July 2021, which are resampled to hourly observations.

Besides GHI, DNI and DHI, this station has additional weather-related variables available (e.g., air temperature, humidity, and wind speed), as well as sensor-specific data. The details of the sensors and measurements available in each station can be found under the section “Instrument history and meta data” of each MIDC’s station webpage.

Let’s list the variables available and then subset those that we will use in this example:

It is often helpful to visualize the data in order to check that the measurements are within the expected ones. For example, a plot for a single day (18th July 2021):

For an overall representation of the data, it’s useful to inspect the the key statistical metrics for the data:

The 3 solar decomposition models that we will implement in this section (i.e., DISC, DIRINT and Erbs models) have different inputs to be implemented. Solar position data is a common input for the 3 models. The DISC and DIRINT models accept as a possible input the dew (wet-bulb) temperature (\(T_d\)). This variable is not directly available from our weather observations; however, it can be easily estimated using a simple conversion that has relative humidity (\(RH\)) and the ambient temperature (\(T_a\)) as input. This simple approximation is given by the equation below (Lawrence, 2005):

In Python, this equation could be implemented as follows:

The DISC model (Maxwell, 1987) requires the following inputs: GHI, solar zenith angle, and the atmospheric pressure, which is used to estimate the absolute (pressure-corrected) airmass.

The functoin returns the DNI, the clearness index (\(k_t\)) and the airmass estimation:

The DIRINDEX model (Pérez et al., 2002) was found to be one of the two best decomposition models in an extensive study by Gueymard and Ruiz-Arias (2016). The model is an enhancement of the DIRINT model by considering clearsky data.

The Erbs model (Erbs et al., 1982) is a simple and very popular model that only requires GHI and the solar zenith angle. This model is also available in pvlib and the implementation is equally straight-forward:

Comparison and evaluation of decomposition models#

The correlation between the obtained models and the measured observations can be also presented in scatter plots:

The evaluation cannot be only based on a visual inspection. For solar resource assessment, there are a number of common metrics to evaluate the error and performance, which we will use below. These metrics are the mean bias error (MBE) and the root mean square error (RMSE). The MBE is the average error representing a systematic error to under- or overestimate and the RMSE is a measure of the dispersion of the deviations.

where \(n\) is the size of the sample or dataset, \(M_i\) is each of the predicted values and \(O_i\) are the observed or true values. In Python, each of these evaluation metrics can be defined as function.

For the comparison of evaluation metrics, only measurement for periods where the solar elevation is greater than 5 degrees are used:

For the DISC method:

For the Erbs method:

The performance metrics show that, in this example, the DIRINDEX method reports the lowest error metrics, followed by the Erbs model, the DISC, and the DIRINT methods, respectively.

This section has presented the solar radiation decomposition methods, which are a common type of technique to estimate the direct normal or beam irradiance from global horizontal irradiance observations. Particularly, the following examples have been covered:

Within solar resource assessment, decomposition methods are used as means to estimate the direct irradiance or irradiation for further analysis in particular applications. For example, in solar concentrating power where direct irradiance is essential for power generation availability. There are multiple decomposition methods available in the literature. However, the Python functions for these 4 methods are available in the Python library pvlib.