Solar position is a fundamental aspect of solar resource assessment. The different angles used in the reference system to locate the sun at a particular time and location are probably the most common input in solar resource modelling and assessment.

In this section, we cover:

The reference solar position system used for solar systems is usually a horizontal coordinate system focused on the observer. In this system, any observed placed at a given latitude and longitude is completeley determined by the zenith (\(\theta\)) and azimuth angles \(\phi\) (see Figure). The solar elevation angle (\(\alpha\)) is the complementary of the zenith solar angle (\(\alpha\) = 90 - \(\theta\)). 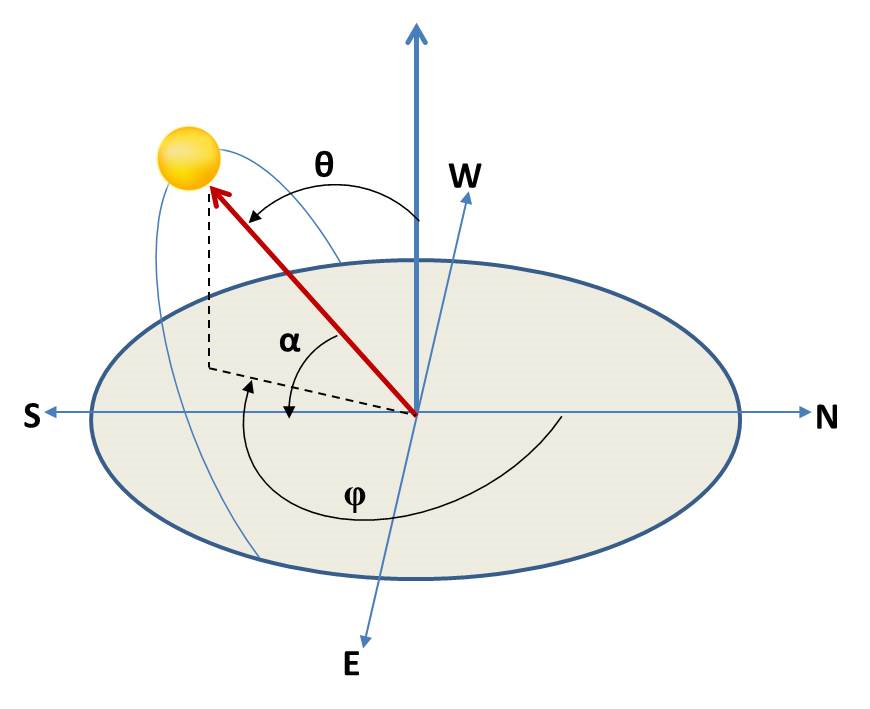 Let’s import the required libraries and see an example:

A way to estimate the solar position is through the object pvlib.location.Location in the library pvlib, which helps defining its particular geographic location (e.g., latitude, longitude, timezone, and altitude).

Alternatively, the function pvlib.solarposition.get_solarposition() can be used to obtain the same result:

We observe that both lines of code return the same output. After the solar angles are estimated, these can be visualized:

In the example above, we used the default SPA available in pvlib. However, there are several algorithms for estimating the solar position implemented in pvlib. You can use your preferred algorithm by defining the argument method when calling the function get_solarposition(). The 5 avaiable SPAs are:

There are other solar position algorithms available in the literature, for example, the Solar Geometry 2 (SG2) model (Blanc and Wald, 2012), which is available in Matlab and C language.

Below, we will compare some of these methods, namely: NREL SPA (‘nrel_numpy’), PyEphem (‘pyephem’) and Ephemeris (‘ephemeris’).

We can visualize the differences in the estimations of the solar zenith angle:

We can visualize the differences in the estimations of the solar azimuth angle:

The absolute differences between methods can then be computed:

We observe that the differences among methods are small in the range of 0.01 degree.

The use of solar position algorithms in solar resource can have several direct applications. For example, the visualization of sun path diagrams or the estimation of sunrise, sunset and solar transit time.

One of the applications of solar position can creating the solar analemman. An analemma is a diagram showing the position of the Sun in the sky as seen from a fixed location on Earth at the same mean solar time. In Python, we could implement the analemma as follows:

Sun path diagrams throughout the day are another application of the solar angles. There are some well documented examples availabe for sun path diagrams in the documentation of pvlib.

The Equation of Time can also be estimated using the available pvlib functions related to solar position. In fact, it is one of the available outputs when using the NREL’s SPA method. The equation of time is the difference apparent solar time minus mean solar time. In other words, if the sun is ahead of the clock the sign is positive, and if the clock is ahead of the sun the sign is negative. Let’s see how the equation of time looks:

This section has introduced the basics of solar position and how to estimate in Python the characteristic angles used in solar energy applications. Particularly, the following examples have been covered:

Solar angles are typically used as input to multiple solar resource modelling techniques and you will find in other sections of AssessingSolar.org.